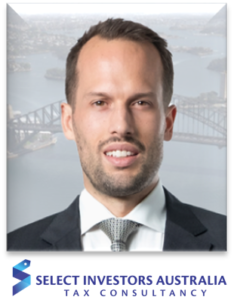 Tristan Perry, Head of Tax Australia for Select Investors Australia, last week presented at AustCham’s Australian 2021-22 Budget breakfast, which had been handed down on Tuesday 11th of May 2021. This had been labelled an election budget, however buried in the detail was a proposed change in the Australian Tax Residency rules.

Most tax practitioners would agree that the rules are well overdue for an update as they date back to the 1936 Income Tax Assessment Act; and have been largely determined by case law over the last 80 years thanks to the lack of bright line tests and grey areas, so initially this was a welcomed change. However, as they say, the devil is in the detail.

The new proposed changes are based on a 135 page report, prepared by the Board of Taxation and labelled “Reforming Individual Tax Residency Rules – A model for modernisation March 2019”. The secondary tests can catch most expatriates if you are in Australia for more than 44 days in an Australian financial year. This includes business travel.

Physical presence plays a large part of these proposed rules with 45 days being a crucial point.

Here is how they work:

For Incoming Tax Residents: I.e Existing non-resident expatriates who may intend or accidentally be deemed as Australian Tax Resident.

If you meet two of more of these factors, you are deemed as an Australian tax resident from the first day you arrive in Australia. They are as follows:

Accordingly, most Australian Expatriates will be able to meet at least 2 of the 4 tests and hence be deemed an Australian resident for tax purposes.

First Step: Did you Satisfy the overseas employment rule which is ALL of the below?

If Yes, you are a non-resident from the day you leave Australia, if no, see the next step.

Second Step: Have you been an Australian tax resident for less than 3 years? (I.e. short term or long term tax resident)

If Yes (Short Term Tax Resident), then did you spend less than 45 days in Australia and satisfy less than 2 factors from the factor test as above? If yes, you are a non-resident for tax purposes from the day you left. If no, you are a tax resident and need to wait until you can satisfy the above.

If you have been an Australian tax resident for more than three years, then in order to cease Australian tax residency, you need to spend less than 45 days in Australia in the current year, and the previous two years. If yes, you then change residency from the beginning of the current financial year (noting that the previous two years will be resident years, even though you spent less than 45 days each year). This situation is a little remote however could apply to someone who is considering retiring overseas or just overseas without employment after living in Australia for more than three years.

Accordingly, you can see that it is difficult to cease tax residency if you have only been back as a resident for less than three years (for example an expatriate temporarily returning to Australia).

Being in Singapore, we are lucky to have the operation of a double tax agreement between Australia and Singapore which features a tie-breaker test for those who are considered tax residents of both countries. The key factors of these tie breaker tests include a review of such factors as:

The success of the above factors has been linked to an estimated day count of 60 or less in Australia, together with maintaining strong economic relations with Singapore, housing in Singapore and in general, a “life” based around Singapore and not Australia.

When do the new rules come into effect?

Note that these measures will have effect from the first income year after the date of Royal Assent of the enabling legislation, meaning that they still need to be passed. If they are heavily lobbied, just like the recent changes to the Principal Place of Residence Exemption, it could be a year or two until we see them come into play, and likely in a slightly different format.

The proposed rules do provide certainty from an Australian residency standpoint and definitely remove the “grey” which taxpayers and tax practitioners have been dealing with since 1936. However, as the 45-day count is total days in Australia, we can only assume that there is no carve-out for business travel, which makes cross border business harder between the two countries for those expatriates who also want to spend time with their family. Further hotel quarantine adds an additional 14-day flag fall onto your day count meaning even less time in Australia for family and business in today’s current pandemic.

Knowledge is power but planning is bliss.

Planning for such an event well ahead of time to get your assets and income in a state of readiness for that planned or unplanned return to the residence could be the difference between a great and a good retirement. Please reach out for an obligation free meeting to discuss your specific circumstances. Tristan.perry@selectinvestorsaustralia.sg / 9108 6398

The above information is general in nature and could vary depending on your personal circumstances.

Protecting Your Business and Ensuring its Continuity