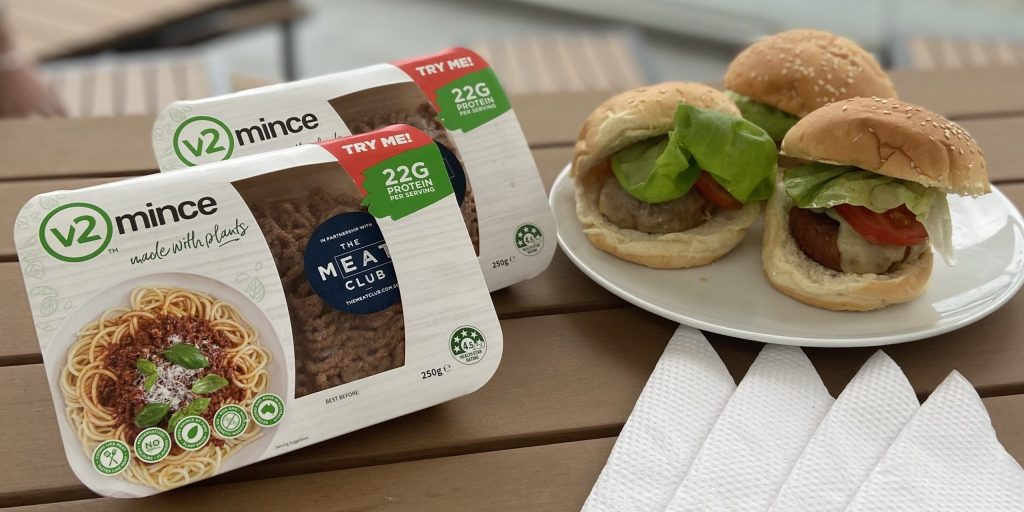 CSIRO food texture and flavour scientists worked with v2food to develop a product that meets the standards of discerning consumers. Derived from pea protein, researchers looked to replicate the structure of meat products while maintaining a similar taste. Impressively creating a new consumer-ready offering in just eight months. The goal was to make a tasty plant-based meat that is affordable and sustainable and rest assured when you eat v2food you get the same hit of protein, iron, zinc, phosphorus as well as Vitamin’s B12, B3 and B6 as beef mince with some extra dietary fibre as well.

With the planet’s population forecast to hit 10 billion people by 2050, a more sustainable way to keep up with growing meat demand is needed. Recognising that people’s eating habits will only change if they are provided with convenient, tasty and cost-equivalent alternatives, v2food uses protein extracted from legumes to create ‘mince’ that looks, tastes and cooks like quality meat. According to a research by Euromonitor International, it is reported that the alternative protein market in Asia-Pacific is worth $17.1 billion in 2020.

Off the back of this Australian innovation and growing opportunity v2food has closed Australia’s largest funding round in the plant-based meat sector. Joining the round are new and existing investors including ABC World Asia, Altitude Partners, China Renaissance, Esenagro, Horizons Ventures, Main Sequence Ventures, Marinya Capital, Novel Investments, Sequoia Capital China and Temasek.

This funding round brings v2food’s total funds raised to $113 million, will enable the company to complete its production facility in Wodonga, grow its team and continue to launch products into new markets, including Asia.

The product is already making waves in Australia and Australians can get their meat-based protein fix in Drakes and Woolworths supermarkets.

For us in Singapore, good news is that v2food is available here.

The Key Considerations for Planning Your Financial Future

Employees working longer doesn’t mean you are getting more productivity