Aquaculture, the farming or ranching of animals and plants in either marine, brackish or freshwater, is one of the fastest growing industries on the planet. With production from capture fisheries plateauing at 90 million tons per year, we have seen aquaculture grow to equal what we catch from the wild in just a few decades. 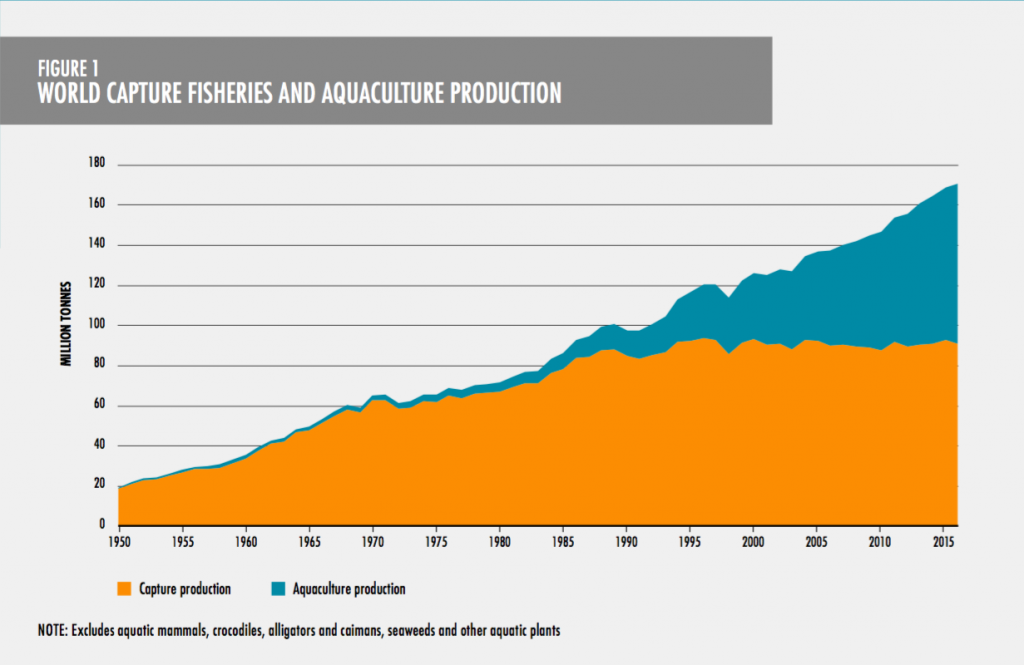 It makes sense. The planet is 75% water. The animals and plants that grow in water are neutrally buoyant and do not need to invest energy into growing thick bones or trunks to fight gravity and hold themselves up off the ground. They can instead divert that energy – kelp can grow as much as two feet in a day!

Feed conversion ratios – the amount of feed used to get a kilogram of meat – are the lowest in aquatic animals. This means that we can grow a lot more for a lot less.

As a result, more of the salmon, barramundi, tilapia, catfish etc. consumed in the world today is from farms than from the wild. Same for oysters and mussels.

To feed the more than 10 billion people that might be on the planet in 2050, it is estimated that aquaculture needs to grow 10% a year to meet that demand.  However it must do so sustainably and there are a number of challenges to meet.

One of the most critical challenges we face is the feed used in aquaculture. Known as aquafeeds, there has been reliance on fishmeal and oil from the capture and milling of wild forage fish. Thus the aquafeed industry has been examining fishmeal and fish oil replacements and has been using plant-based sources of protein such as soy and legumes. However, plants can contain anti-nutritional factors and thus companies such as DSM are creating enzymes and other supplements to improve feed digestibility and the health and welfare of the animals, as well as minimise waste and the environmental impact of feeds. Other biotechnology companies such as Calysta and Protix respectively, are using fermentation technology and insect larvae to provide protein, and Veramaris are short-circuiting the food chain to grow fish oil from algae. These innovations are all helping to underpin the sustainable development of the industry.

Other ways to improve the use of feed have been realised through genetic selection. That is, selecting strains that not only maximise the genetic potential but also increase feed intake, and utilisation as well minimising the amount of energy animals need to spend on maintaining basic metabolism. WorldFish, a publicly funded research organisation whose goal is to reduce poverty and hunger through aquaculture, created Genetically Improved Farmed Tilapia (GIFT) that grow up to 85% faster than other tilapia.

In addition to feed and genetic developments we are also seeing integrated multi-trophic aquaculture systems: where the waste from growing carnivores can be used to grow other animals and plants in the same system – both improving productivity, returns on investment and reducing environmental impact. Here in Singapore, in collaboration with the local campus of Australia’s James Cook University and through the establishment of the Aquaculture Innovation Centre, there will soon be a lot more research underway into this very important industry.

Dr Alistair Douglas studied aquaculture at James Cook University in the 90s and as Founder and Partner at Eachmile Technologies works at the intersection of industry, sustainability and technology.

A Discretionary Investment Manager: Why it might be the solution to your financial health